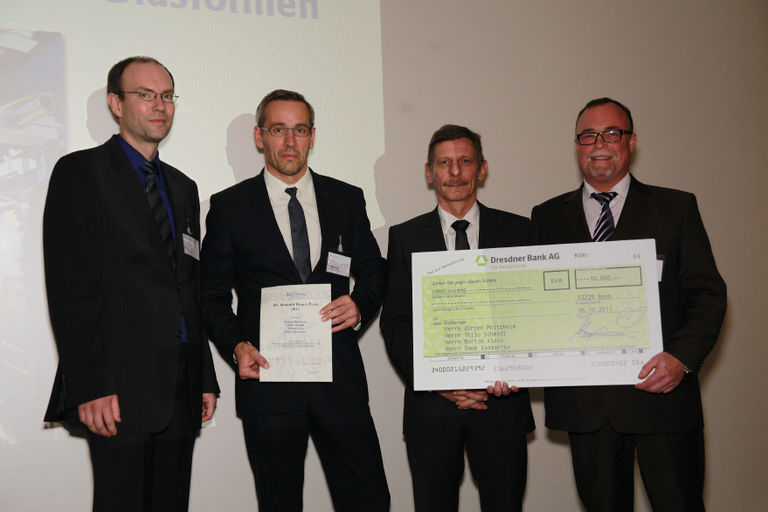 For the ninth time already, the Dr. Reinold Hagen foundation (Bonn) has honored pioneering developments in blow molding engineering with its "Innovation in Blow Molding" award. This year's winner was announced on October 5, 2011 on the occasion of the "Blow Molding Engineering 2011" convention organized by the Association of German Engineers (VDI) in Baden Baden. An independent jury of members of the Blow Molding advisory board of the VDI Plastics Engineering department had selected the winner from a number of high-caliber submissions.

In plastic fuel tanks, the permeation of hydrocarbons through the wall is usually prevented by a special barrier layer as part of a 6-layer coextrusion process. However, if service openings or holes are created subsequently, the barrier layer will be destroyed. On the other hand, statutory requirements are becoming more and more demanding, for instance the US standards LEV III (Low Emission Vehicle) or PZEV (Partial Zero-Emissions Vehicle). Many efforts are thus focused on integrating the process of fitting interior tank components, such as the fuel pump, directly into the blow molding process.

As an alternative to known methods such as the various twin-sheet methods (TSBM, NGFS), the Ship-in-the-bottle (SIB) or Tank Advanced Process Technology (TAPT) processes, the experts at Kautex Maschinenbau have now developed a new method. In the so-called C3LS® blow molding process, the tubular parison is slit open in longitudinal direction at one point while it is being extruded and is unfolded. With the blow mold partly closed, components such as fuel pump, level indicator, anti-splash baffle, valves and venting conduits can now be introduced through the opening created in the parison into the interior of the pre-blown tank bladder.

Apart from lower costs of the blow mold, the new method also results in a more compact design of the machine. It can be combined with the tried and tested Kautex 6 layer coextrusion head technology and the known wall thickness control systems.

Mr. Andreas Lichtenauer, Managing Director of Kautex Maschinenbau, said: "We are proud to win this coveted award as it is a clear acknowledgement of the quest for innovation pursued so relentlessly by our company."

Our aim at Kautex, is to join our customers and partners in assuming a pioneering role in transition and the creation of added value with smart production solutions for extrusion blow molding.