Kautex Maschinenbau sets new standards in the manufacture of consumer packaging with a pioneering machine concept. The all-electric KBB series offers maximum freedom in configuration, through which the processor can react flexibly to the ever faster changing demands of the market. Performance and energy consumption have also been optimized.

Less energy, more power
"Our new generation of machines achieves its high performance levels through less downtime," explains Dietmar Michels, Product Manager at Kautex Maschinenbau. "We significantly accelerated transport movements in the machine as well as the opening and closing movement of the mold, reducing the traversing time for 770 mm from the head to the calibration position to only 0.6 seconds." The cooling phase has also been shortened. Compared to conventional production systems, the new machine concept achieves a reduction of 25 percent in the dry cycle time.

Usually, higher performance requires even higher energy consumption. This is exactly the opposite for machines of the KBB series: "By using lighter materials, we have significantly reduced the moving mass. In this way, we were able to increase not only the performance, but also to reduce the required drive power," says Dietmar Michels. There is also a system for recovering energy where the excess braking energy is fed back into the machine or the processor’s network via an intermediate circuit.

Minimizes downtime
A procedure for changing molds, exclusive to Kautex Maschinenbau, allows for further efficiency improvements in the production process. A change of mold can be performed by two persons in less than 15 minutes. An automatic lubrication system provides for an additional reduction of downtime by reducing maintenance. Last but not least, all necessary adjustments for optimizing material and the machine settings can be performed during operation. Consequently, the machine does not need to be stopped, for example, to adjust the closing or calibration forces. This simplifies handling and saves time.

Altogether, the four models of the KBB series offer feed strokes from 400 to 1,000 millimeters and closing forces from 10 to 40 tons, so that a wide spectrum of production possibilities is covered. As an option, the manufacturer has developed a new type of remote monitoring via the Internet, as well as a virtual training station.

At the K 2007 show, Kautex Maschinenbau announced that it would continue to focus on consumer packaging. Six years later, the result of this project is now presented at the K 2013. With the new, all-electric KBB series, the company presents a pioneering machine concept that sets new standards in the packaging segment.

Industry 4.0 with BC Connect
But the development of new machine models is not the only reason why the leading manufacturer of blow molding machines is a trend-setter in the industry. Kautex Maschinebau also introduces real innovations in the areas of Industry 4.0 and service to visitors at the international trade show. The best example of this is the remote monitoring tool BC Connect. This is web-based software that allows processors to conveniently access their blow molding machines via the Internet. Current performance data can be called up from anywhere in the world at any time via desktop, tablet PC or smartphone.

Virtual machines
Kautex Maschinenbau presents another highlight of the fair as well as genuine progress in training and education with its newly developed virtual machines. These are simulations in which the control and operating interfaces correspond to the real machine. All triggered processes and production runs are displayed in a simulation program. This allows staff to be trained to work with the machine, and the new configuration to be tested without risk, without needing to take the machine out of production.

Kautex Maschinenbau at the NPE 2012

Since 1946, the international plastics industry has met at the NPE in the United States. The NPE is the third largest plastics fair in the world – the largest in the United States. It will be taking place this year from the 1st to the 5th of April 2012 for the first time at the Orange County Convention Center in Orlando, Florida. The subject of sustainability will be a central theme.

The NPE is the measure of trends for the industry with new products and strategies that enable them to meet current and future market requirements. Kautex Maschinenbau GmbH will also make its presence felt with 250 m² exhibition space (Booth #1751) and also introduce the main innovation drivers of the company.

Megatrends of the future: efficiency, sustainability and service
As a leading manufacturer of extrusion blow molding technology, Kautex uses sustainable and efficient production of plastics. In the process, the company consistently takes on new challenges in the development of products and service concepts: What does globalization mean for the plastics industry? What do customers expect from innovative service concepts? How can standards for sustainable production be redefined?

Top ideas, top products, top service
From idea to finished product – and far beyond, Kautex accompanies its customers and partners in all phases of the product life cycle. Together with the customer, Kautex designs and manufactures products and machines with the specific requirements of each customer. Through rapid prototyping and simulation of the product, a prototype of the product is directly implemented without manual modeling and can be simulated and implemented directly in its use, so that the packaging meets all requirements precisely. Kautex staff accompanies the production process at the customers’ site after purchase, as well. Each step of the procedure and production process is continuously optimized in order to achieve smooth operations and improve efficiency and quality.
Efficient production is only possible with a customer-oriented, quick service, Thilo Schmidt, Director Global Customer Service & Partner. “We use a decentralized service structure approach worldwide. Even in the U.S. service technicians are stationed locally. If a customer requests a service technician via the 24-hour emergency service, in most cases he will arrive at the plant on the same day.” Thanks to state-of-the-art, logistics all important spare and wear parts are available within 48 hours. 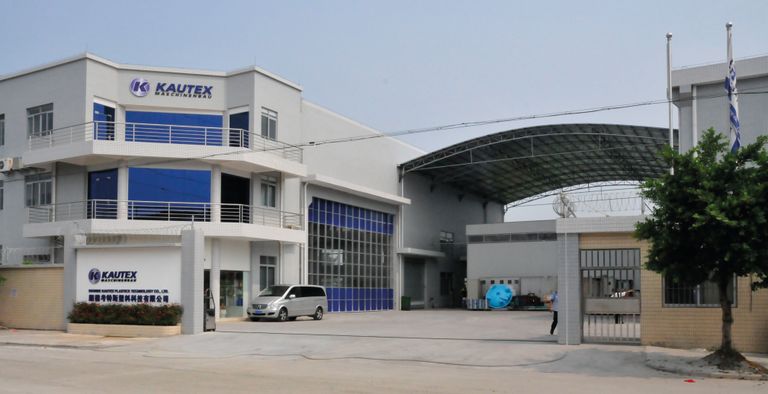 On March 12, Kautex Maschinenbau will open its new plant in China. For the Bonn (Germany) based manufacturer of blow molding machinery, this is an important step that will give room for further growth. The previous production facility in Shunde (in the province of Guangdong) was already bursting at the seams. The new plant—also in Shunde—meets the current requirements in terms of production capacity and quality standards.

Long but successful search
The new plant was constructed only a few minutes' drive away from the old site. Bright, pleasant and functional, it offers plenty of space for the production, development, service and sales operations as well as visiting customers. “In many respects, our old site no longer met our requirements. Also its outward appearance did not project the quality of our products,” says Mr. Gouliang Du, President of Shunde Kautex Plastics Technology.

Room for growth
The newly built plant will just allow the manufacturing of more machines, but more importantly of larger machines. This is made possible by a higher ceiling in the production hall and correspondingly higher craneways. “We need the space mainly for the multi-layer and multi-cavity machines that are increasingly in demand”.
Already this year, a significantly higher number of machines will be manufactured and shipped to customers. The new production hall, designed with much natural lighting like its Bonn counterpart, and the new and substantially larger office wing will bring enormous improvements for the ca. 115 employees.
Bright and pleasant conference rooms of various sizes will provide an appropriate setting for visiting customers. Also the desire to have more room for training has been addressed. Engineering and Sales will have their new home on the ground floor so as to be as close as possible to the assembly hall. Mr. Gouliang Du is confident that the new facility provides the ideal conditions to achieve the desired growth. 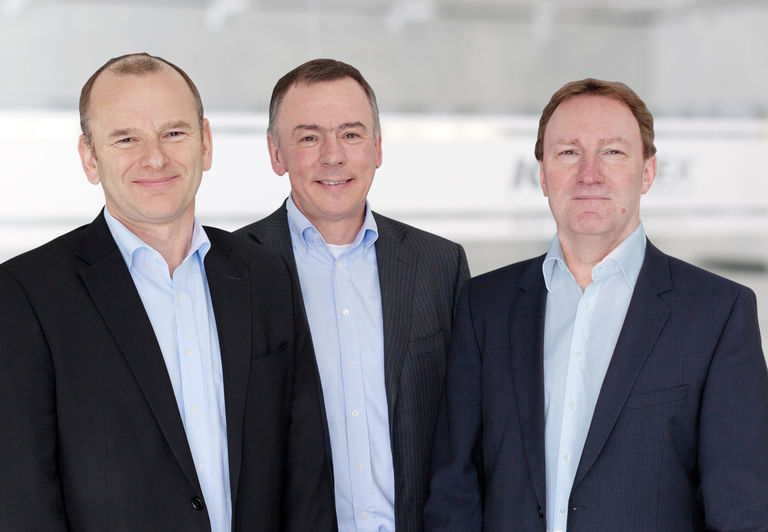 capiton AG is the latest shareholder in the Kautex Group. With this new shareholding, the Berlin-based investors are taking over from former shareholders Steadfast Capital. In March 2007 Steadfast Capital joined together with five members of the management team to buy out 100 percent of the shares held by the Munich-based investment firm Adcuram AG. The latest change of shareholders was approved by Germany's Federal Cartel Authority on 18 January 2013.

Management team now majority shareholders
The Kautex Group is the world's leading manufacturer of extrusion blow molding machinery for the production of plastic containers. "Over the last six years, our close working relationship with Steadfast Capital has helped us to increase the Kautex Group's sales by 75%, despite the slump in demand experienced in 2008 and 2009. We have invested in design and development, sales and customer service, and we are particularly proud of our new Technikum, which we opened in 2012", says Dr. Olaf Weiland, CEO of Kautex Maschinenbau. With this latest change in investors, the management has increased its equity share to 50.1 percent and now holds the majority share in the Kautex Group. The transaction was financed by the capiton IV fund and bank loans. "capiton is a trusted and experienced investor that is totally committed to our values. As a result, we now have the best possible conditions for continuing to develop and strengthen our business activities and the Kautex brand", adds Weiland.

Steady growth
Since leaving the SIG Group in 2004, Kautex Maschinenbau has grown steadily to become the international market leader, with sales in excess of €100 million. Kautex Maschinenbau is at home in every area of extrusion blow molding technology, including automotive applications (such as fuel tanks), packaging and other specialized fields. And the company is expecting above-average growth in the future because blow-molding technology is gaining ground in many other industries. Kautex Maschinenbau is perfectly placed to handle this increased demand from its production plants in Germany and China and its global sales and service network.

Our aim at Kautex, is to join our customers and partners in assuming a pioneering role in transition and the creation of added value with smart production solutions for extrusion blow molding.